Looking Through A Glass Onion 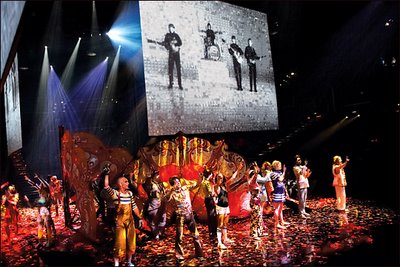 I haven't seen Cirque Du Soleil's Beatles extravaganza 'Love' at The Mirage, Las Vegas because Hey! I don't get to Vegas too much anymore, pally! but judging from George (& son Giles) Martin's extraordinary mash-up/pop art collage/extended suite of the Beatles' greatest hits created to soundtrack the performance, it must be quite a show.

Listening to the CD itself is a startling experience.

Firstly, this is the first time anyone's been permitted officially to mess with The Beatles music. The Martins have cut, segued and overlain riffs, drumbeats, instrumental sections, vocal snippets and miscellaneous sounds from a number of Beatles recordings over others.

Sometimes this makes for a bit of a dog's breakfast - I'm not sure that 'Strawberry Fields Forever' (which is a pretty much perfect cut-up of several Lennon interpretations and 'takes' in its original form in any case) benefits tremendously from more chaotic overdubs in its crescendo section - but occasionally it is dazzling.

Running the hypnotic drum loop of 'Tomorrow Never Knows' over the intro of George's 'Within You, Without You' is a case in point; extending 'Eleanor Rigby' with sections of George Martin's original vocal-free string arrangement (released for the first time on the Anthology collection) is another.

And the only track to feature newly recorded music - an early solo version of Harrison's 'While My Guitar Gently Weeps' which George Martin has orchestrated with characteristic beauty and restraint - is easily the most moving piece here, its abandoned-on-the-final recording lyric - 'I look from the wings at the play you are staging.....As I'm sitting here doing nothing but aging' - both perfect for a theatrical work and eloquently touching given Martin's age (80) and Harrison's all too recent death.

Sometimes listening to this CD is a kind of hallucinatory experience. Like looking through a glass onion, in fact - at songs so familiar they are part of our very consciousness, and watching them twist, stretch, spin, shatter, merge, wink and frequently shimmer in unexpected light.

That light is mostly cast by the restored sound. Because incredibly, cruelly, criminally (GUILTY Apple/EMI!) this is the first time that most of these songs have been remastered.

TGOE joins all those other thousands of voices on the web (and off it) in begging and pleading with The Powers That Be in The Beatles camp to finally give us the original albums - and not just this interesting one-off - in remastered forms.

For a limited period you can listen to a stream of the whole of Love at http://www.beatles.com/
Posted by davyh at 5:38 pm No comments:

The Star Of A Story I'll Always Tell 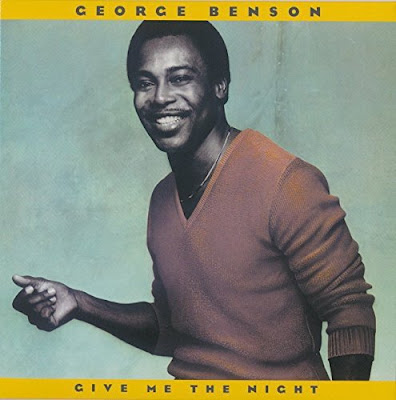 You're in a bar with a friend. Someone you've known for a while, though never really got 'deep' with. A few vodka limes (his favourite drink) have gone by...The conversation turns (when doesn't it with the people we love?) to music. You pop The Big Question....

''So listen. When it comes right on down to it, what's your favourite album of all time? No, really.'

He takes a sip of the vodka lime.

You prepare yourself for One Of Those Answers. You know the contenders, need we detail them here?

'You know what, it's probably Give Me The Night by George Benson. You know it?'

'Yes I know it. Never put it in THAT category though....'

Next day, you put on that album. You think you might hear it with new ears....

Well....first off, acknowledge you HAVE always loved it. Think of your friend; hear what he might hear in it.

' You know what? This is not Obvious, but it IS lovely'.

Composed. A mood. A moment. A WARM, intimate 45 minute thing (remember when albums lasted just three quarters of an hour?).

The friend is right.

A prodigiously talented jazz instrumentalist turned popular singer (precedent = Nat 'King' Cole) - with a voice, by the way, that could melt Big Frozen Things - George Benson is one of the great critically unsung heroes of black American music of the 70s and 80s.

This record'll be warming the cockles of the hearts of ordinary people in ordinary love on ordinary Friday nights long after the OK Computers of this world have been boxed and labelled 'Officially Classic....Yet Mostly Unplayed'.

Go on. Indulge yourself. Say The Ghost's friend sent you.
Posted by davyh at 10:00 pm No comments:


With his part-polemic, part-autobiog The Progressive Patriot in the book shops, and his CD back catalogue reissued and remastered, Stephen William Bragg is enjoying a much deserved upsurge in meeja interest.

Here he is bringing Barking Bardotry to our American cousins back, as they say, 'in the day'...
Posted by davyh at 1:06 pm No comments: 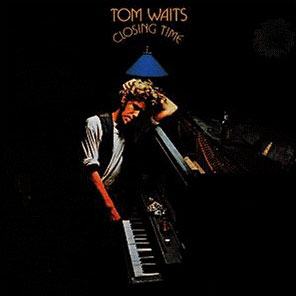 As Tom Waits releases Orphans, a triple-disc set of new and uncollected material, songs from the other end of the man's strange and wonderful career - his debut album Closing Time and its follow up The Heart Of Saturday Night - are currently soundtracking TGOE's cold November nights.

What beautiful, bluesy, boozy, late night bar-fly lyricism there is here! What storytelling! How come these albums don't make all those top 50 lists and how come (just imagine!) Sinatra never got to sing a Tom Waits song?

How come I got to forty before I even heard this stuff?

Tom's off the booze now - but meet me at the bar and I'll buy you a bourbon and we'll 'laugh at that old bloodshot moon in a burgundy sky'....

While you're at it, and while we consider laureates of the American lost, Raymond Carver's short story collection Where I'm Calling From here.

Finally, a cracking interview with Tom Waits in this month's edition of The Word magazine.
Posted by davyh at 2:07 pm No comments: