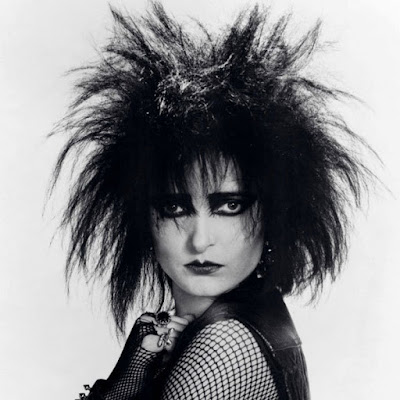 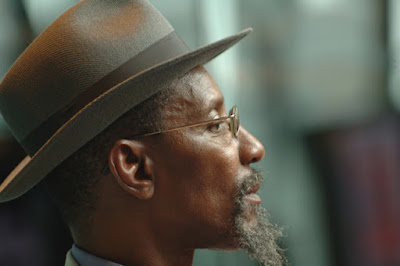 Ladies and gentlemen, I give you the big bass sound of Dennis Bovell, in dub.

If I blow just one person's speakers with this, it'll all have been worthwhile. 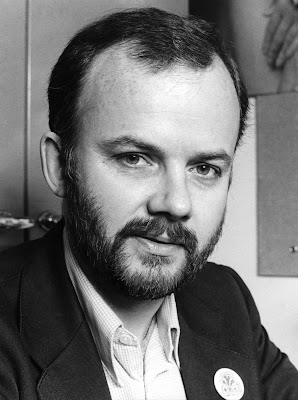 Well it had to be a (UK) reggae Session from me, and not only that but one I heard and taped at the time, upstairs in the 70s house with a Westerly dashing rain against the window (transmission date 4th November, it was always raining in Devon in November).

There's a happy blog connection with this one too since many, many years on from having no version of this but my crappy mono cassette recording, a complete, clean copy found its way to me in comments here courtesy 'marc from newsgroups' (shout out Marc!). So I suppose posting this is a bit of my story and a bit of this blog's too, as well as a fragment of JP's.

Everyone has their classic period Peel, their time of listening most intensely and connecting most passionately, and mine ran from about 1980 to 1983. Peel himself was then a year or two younger than I am now; it was a peak time for the show, though there would be many more to come.

Laurel & Hardy (aka Paul Dawkins and Anthony Robinson) had one novelty hit with 'Clunk Click' then pretty much disappeared. Meanwhile when I 'scrobble' 'Tell Her Sey Me Sorry' to Last FM I get a picture of Stan and Ollie. But I am still playing it, thanks John.

Something For The Weakened 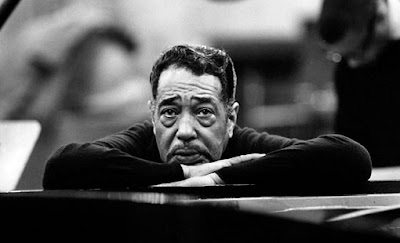 This is the track after my favourite track (which is very favourite, and has already appeared here) on Duke Ellington's New Orleans Suite and it isn't one I often play; but yesterday, as I pulled the LP from its lovely thick gatefold sleeve, fancying a bit of a listen as the Sunday potatoes roasted, this happened, for a change, to be the track I chose.

And boy that bubbling bass boomed at me good.

On a late-period Ellington recording that contrastingly looks back, right back, at the Old Jazz, the place it came from and some of the people who made it, who are commemorated in musical 'portraits', this piece is a tribute to one of Ellington's own; his bassist throughout the 1920s and 30s whose 'vigorous melodic bass playing, alternately plucking, slapping, and bowing, was an important feature of the early Ellington Orchestra sound'.

Braud died in 1966. Joe Benjamin, the bass player here, would himself be gone four years after this recording - and so would Duke. 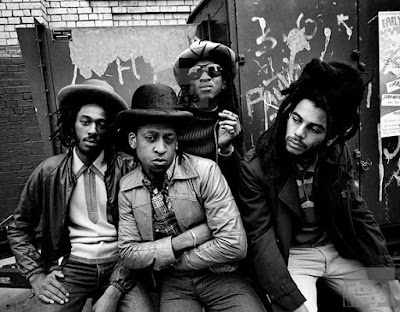 *An Aswad track was here*

[ *sigh* Box.net has responded to a copyright infringement notice and removed this file; I've removed the link. First in 17 Friday Reggae posts over nearly 4 years that this has happened with. Tune's on YouTube mind].
Posted by davyh at 5:10 pm 14 comments:

Some days, although we cannot pray, a prayer
utters itself. So, a woman will lift
her head from the sieve of her hands and stare
at the minims sung by a tree, a sudden gift.

Some nights, although we are faithless, the truth
enters our hearts, that small familiar pain;
then a man will stand stock-still, hearing his youth
in the distant Latin chanting of a train.

Pray for us now. Grade 1 piano scales
console the lodger looking out across
a Midlands town. Then dusk, and someone calls
a child's name as though they named their loss.

Darkness outside. Inside, the radio's prayer -
Rockall. Malin. Dogger. Finisterre.

(Thanks to Lee for inspiration with this - and to Greer for reminding me that we haven't had a 'perm' here for a while).
Posted by davyh at 10:36 am 12 comments:

I was mighty pleased to grab a newly computerised Peel show tape of '79 vintage this week from the Wiki and delighted too to hear this on it, for the first time in an age: it made me want to upload my original old 7" from back in the day - so I have; and it's here and it's Friday and the sun is shining and it's been 23 degrees in London today, yeah baby.

I shall require a beverage.

It's four years to the day since I started up this blog (it was raining then too).

Can't imagine my life without it now.

Companeros, thanks so much for sticking around.

Like I always say, it'd be stupidly lonely here without you x

'If you like an instrument that sings, play the saxophone. At its best it's like the human voice' - Stan Getz.

A Tango Of Love 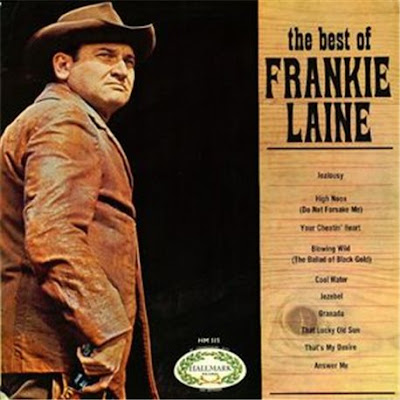 Frankie Laine is my Mum's favourite singer and one of only two recording artists in my experience who have the power to thoroughly transport her emotionally, the other being Glenn Miller (I once came home from school to find her dancing with a squeezy mop to 'Moonlight Serenade').

I always thought of Frankie as a cowboy because of how he looked on this album cover and because he sang songs about riding through the desert in search of water and High Noon and, famously, the TV themes to 'Champion The Wonder Horse' and 'Rawhide', but he was in truth a Chicago-born Italian-American whose real name was Francesco Lovecchio.

The Italian (Sicilian) ancestry might account for the operatic feel Frankie brought to his singing. He had a truly remarkable voice. I loved it, and I loved the dramatic arrangements - the brass and the tango tempo shifts in 'Jealousy' - the overblown passion of it all. I've been wanting to get some of his stuff for years but it's a nightmare trying to find the original recordings in a sea of cheap compilations since in later life, like many singers of his generation, Laine re-recorded his big hits and the new versions are unlistenably awash with synthesised strings and drum machines - just awful.

This budget Hallmark LP was the one I grew up with - I expect Mum bought it in Woolies. I've seen it a few times in charity shops, but always in terrible nick. Today I found a near mint copy - for a quid.

Saddle up and show 'em how it's done, Frankie.