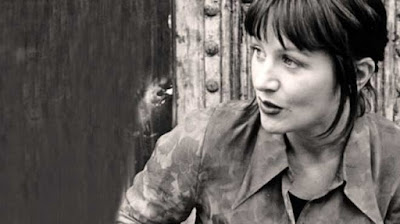 Something's got me thinking about Heidi Berry.


I don't know what it is, but I suspect that the other day when I walked with one of my little girls to the playpark and we spied some small, tightly-clasped-shut fluffy green magnolia buds on a tree in a London garden I may have thought of the imminence of spring and I may have hummed to myself my favourite song on the subject - Ms Berry's 'Hasten The Buds To Bloom' from her album 'Firefly' (1987).


Heidi was born in Boston, Mass, but grew up in London, England. She signed to Alan McGee's Creation Records when it was the home of bands like My Bloody Valentine, The Pastels, House Of Love, Felt and a pre-Screamadelica Primal Scream, but her music owed more to the English folk tradition as developed by Sandy Denny & Fairport Convention than it did to the late 80s indie scene.


I first heard her on a Creation compilation called 'Doing It For The Kids' , side 2 of which opens with her long, lovely, lyrical 'Northshore Train'. It's easily the best (though least typical) track on the album; certainly the most timeless.


She signed to 4AD in the early 90s and sang on the third 4AD 'collective' This Mortal Coil album 'Blood' before going on to record three solo abums for the label.


According to Heidi's website, she now teaches Songwriting and Live Performance at the Brighton Institute of Modern Music having last year


'.....enrolled on the songwriting course run by Ray Davies at The Arvon Foundation. She found this experience, “renewing, inspiring and the hardest work I’ve ever done”. The result is, Heidi is currently recording a collection of new songs. She says, “I’ve got about 40 songs now. How and when they will be released, I haven’t the faintest idea. I just know I need to do this with all my heart.” '


Here are three Heidi tracks - two we've mentioned and that you can buy on the CD issue of 'Beneath The Waves' which contains both the original album of that title and her debut; the third a superb cover of a Husker Du song from her 1991 album 'Love'.

Creation Records were long ago sold (out) to The Man, but there's a decent site for them here.

Hope the buds bloom wherever you are soon...
Posted by davyh at 6:12 pm