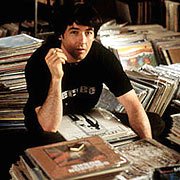 We take it for granted now - we can take all our music with us, wherever we go.

The much-loved High Fidelity-esque bar games of the '20 Songs you'd take RIGHT NOW if you could only take 20 ON PAIN OF DEATH!!' variety are only ever academic.

Well....for the first time (fortysomething late adopter) I own a mobile phone that can accommodate MP3s on its 'media card'. But here's the deal. It'll only take about 20.

Without much thought (no, really), turning off the head, turning on the heart and the short-term memory that holds the things that I'm liking NOW and In This Season rather than The Things I Know Are Classics And Must Always Appear On These Lists (TM), from a potential list of thousands I ended up with these 21 songs....

Some certainly are Songs I Could Not Live Without - others would never make that cut. And some pretty Big Ones are missing (no Marvin Gaye??!!! No DYLAN???).

But do you know what? For me, it's a good personal collection that'd pass the 'music for an emergency' test. This month.

Perhaps it's the beginning of a TGOE manifesto....

The 21 Songs (in no particular order)