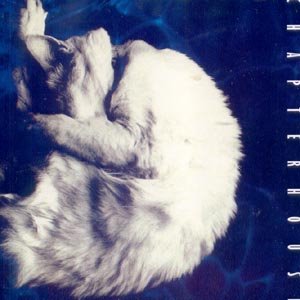 Now as I was young and easy under the apple boughs....or, to be specific as I was (relatively) young and tipsy upfront at the Reading Festival (1991)...we were all caught up in that 'shoegazing' thing: Ride; Slowdive; Curve; and from the former colonies (Hello America!) - The Drop Nineteens. We didn't use the 'shoe' word, of course: it had been invented by a Smart Person From The Music Press who I am sure had spent too much time in the VIP tent drinking sambucas with Shane. Bless! But never mind...

There was a band from Oxford (or possibly Reading or Newbury or Bracknell...very Home Counties this 'scene') called Chapterhouse. Their Big Song was 'Pearl'.

The cover of their debut (and I suspect only) album had on it a picture of a Big, White Fluffy Sleeping Cat curled up in a tight swirly ball. The album was called 'Whirlpool'.

Bet you didn't know that...

2) He belonged to a Frenchman called Marc who designed the sleeve.

All this is true. Would I lie to you?

Today - so much fatter, older and balder - I 'upgraded my Blackberry' (yes, I know) to the new Pearl model.

And I thought: I'm going to Glastonbury next year. Without the frickin' Blackberry.