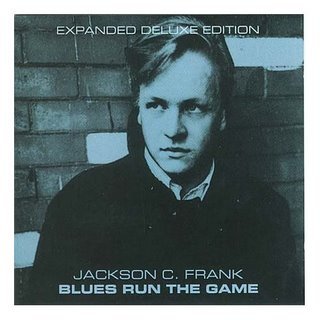 Reading the Clinton Heylin biog (see previous post) clued me in to a player in the mid sixties London folk scene I had never heard about before: his name is Jackson C. Frank and his story is extraordinary.

Traumatised, and badly injured, at just 11 years of age when a gas boiler exploded at his school in Buffalo, NY, killing many of his class mates, Frank took up guitar during long spells in hospital. Haunted in ways we can only imagine, he showed up in London in the early 60s as the folk clubs were burgeoning and fell in with a crowd that included countryman Paul Simon, also then an unknown singer/songwriter; they shared a flat - and Frank began dating a 19 year old nurse called Sandy (Denny).

A song Frank had written on the boat to England, 'Blues Run The Game', became a kind of standard in the clubs - performed, and later recorded, by Simon, Bert Jansch, Sandy Denny and others. Painfully shy, Frank was persuaded to record an eponymously-titled album of his material in 1965, produced by Paul Simon. Featuring just Frank's rich baritone and acoustic guitar, it is a lost classic.

Dogged by mental illness and addiction, Frank fell back into obscurity and onto hard, hard times, living penniless and homeless for a time after showing up in New York City in the mid-70s searching for, but not finding, the by-then internationally-famous Paul Simon.

He was persuaded to write and record again in the 1990s by a fan called Jim Abbott, but his voice was largely shot.

TGOE most seriously recommends you check out this man's extraordinary music.

You can sample Frank tracks at the always excellent music blog Keep The Coffee Coming (look for the September 13th post).
Posted by davyh at 12:07 pm