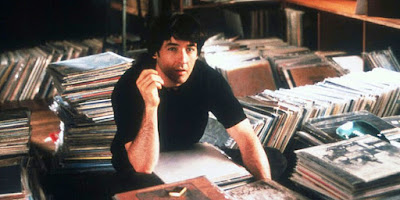 Seasoned readers will remember the High Fidelity-esque challenge foisted upon me after I acquired a mobile phone with MP3 capacity but tragically little of it; there was room for 21 songs - so what would they be?

In a similar spirit, here's a lucky 13 tracks I am liking right now. Because I know you love lists.

I wrote this song years ago
Late at night, somewhere on the Goldhawk Road
I was never sure how or why.
Before the war and the tidal wave engulfed us all, it's true
How the world has changed
And I was learning how to change with you

1988 - ah what bliss it was to be alive at the very beginning of leftfield grunge...

4. Wasted Little DJs - The View (from Hats Off To The Buskers)

In which Felt's 'Lawrence', 80s indie auteur sina qua non, is joined on vocals by Ms Elizabeth 'Cocteau Twins' Fraser. Whom we rather like. Produced by Robin Guthrie too. Peel to the max!

Oh Lord can a stone be ballast for an aching soul?

8. Trains To Brazil - Guillemots (from Through The Window Pane)

Was Richard Hawley robbed by Monkeys - or were they?

In this age of grand illusion you walked into my life out of my dreams
I don't need another change, still you forced a way into my scheme of things

Buckley pere shows us where the sprog got that 4 octave range from. Cracking live acoustic version of my favourite track from Hello & Goodbye.

Stand-out track (from many) on an album of love songs done the Cave way (i.e. full of doubt, darkness, Jesus and the Devil).

12. Twelve Thirty (Young Girls Are Coming To The Canyon) - The Mamas & The Papas

Chaplets see me drugged/I could die in your rosary

I hit 41, I go Gothish again. Weird. Their first album. Bassist Will Heggie, who left shortly afterwards, is very much in the Peter Hook school of doomy bottom end. Which is how it should be.

You must buy The Good, The Bad & The Queen NOW.