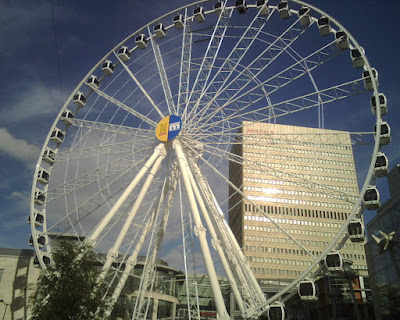 Look! They've got one of these in Manchester too, and like a lot of things there, it's loads cheaper than the one in London.

You will notice too that the sun is shining, something I understand is unusual thereabouts.

Trying to find Ally's Odd Bar (see previous post comments) I was rather taken by this establishment. It was closed, so I continued unpierced and untatooed. I liked the look of The Odd Bar very much, but it seemed too cosy a place to sit in on my own. 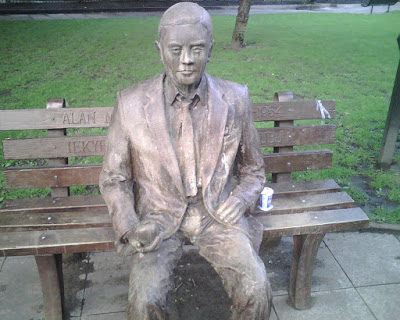 I found this statue of computing pioneer and Nazi code breaker Alan Turing incredibly sad and affecting. It is in Sackville Gardens where certain other gentlemen slumber heavily on benches and pigeons poo freely, as they will. You can see from my photo that someone has left an old yoghurt pot next to it. A slightly faded sign beside the statue details Turing's work and genius (in breaking the Enigma Code he hastened the end of the Second World War and almost certainly saved hundreds of thousands of lives; he is further acknowledged as the godfather of modern computing without which, self-evidently, I would not be able to write this and you would not be able to read it) and the sad story of how he was prevented from working after revealing quite openly to police investigating a burglary at his home that he was in a relationship with another man. He was convicted of 'gross indecency', placed on probation, forced to undergo hormone 'therapy' and later committed suicide by eating an apple laced with cyanide, a 'victim of prejudice'. His work on Artificial Intelligence remained unfinished at his death. The sign notes that none of the major global computer firms approached for help in funding the statue agreed to make a donation.

After that, I needed cheering up. So I called my mate Marty for a reminder of how to find this favourite student pub of his. It used to have its own microbrewery, but now it's gone all Hogshead and they don't brew on site any more. Still, the atmosphere was convivial and even now there were lots of students inside (the Uni's up the road) - students, it struck me in one of those heartstopping moments you get now and then, who would not have been born when Mart and I first drank in here 22 years ago.

Back then we'd been to see Round Midnight at The Cornerhouse.

So this one's for old times sake...

Thanks Manchester, I enjoyed your company.


[The composer's original, from this - the film soundtrack is available here. More about the genius of Alan Turing here].
Posted by davyh at 12:30 pm