What Do They Know Of England Who Only England Know? 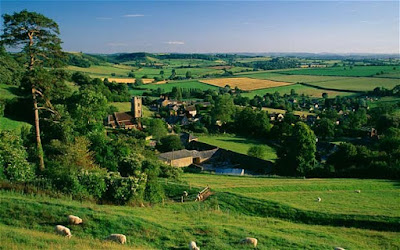 The quote's from Kipling (via Billy Bragg, for some of us).


I thought of it the other day when I was moved by a published excerpt from a speech given by the always excellent Bill Bryson, the American humourist, who as a now-permanent resident of the UK and a long-term, and very passionate, campaigner on behalf of the English countryside, has just been appointed President of The Campaign To Protect Rural England.


If you don't live in England, or elsewhere in Britain come to that, and your image of the country has come from Richard Curtis movies and cable re-runs of Morse and Brideshead Revisited you may be wondering why rural England needs protecting at all; isn't the whole place a lush green arcadia that resonates to the leather on willow crack of village cricket matches and the melodic trilling of song thrushes in ancient hedgerows?

Truth is, rural England is under threat like never before - from a tangled and ever sprawling transport infrastructure, mushrooming out of town development and the relentless creep of new housing (today in parliament Gordon Brown announced that three million new homes would be built by 2020 - 'up 250,000 from the previous plan' - there's a notion to build on already developed 'brownfield' sites, but how many 'brownfield' sites would we need exactly, for three million houses? Won't a few tranches of green belt come in handy somewhere too??).


All of this makes me unspeakably sad. The country I love is disappearing, right in front of my eyes.


And doesn't it prove old Kipling right when it takes a writer from the US Mid-West to express what we have and what we stand to lose with such eloquence? Seems sometimes you have to leave a place, or come there from somewhere else, to see it as it really is....


"Because the countryside is so generally fine and looks so deceptively timeless, it's easy to think of it as somehow fixed and immutable and safely permanent. In fact, it is none of these things, of course - though it is very ancient, even more ancient than people often realise.


Not far from where I live in East Anglia there is a hedge, called Judith's Hedge, which looks like any other. But in fact Judith's Hedge is very venerable indeed. It was planted by a niece of William the Conqueror in the second half of the 11th century. So it is older than Windsor Castle, Westminster Abbey, York Minster - older than most of the buildings in Great Britain.

Even closer to home for me - indeed just beyond my bedroom window - is a handsome church tower that was built at about the same time. It has been standing there, adding a little touch of nobility and grandeur to the landscape, for 900 years. I find that a literally fantastic statement. If this church were in Iowa, people would travel hundreds of miles to see it. Of course, you'd have a job explaining to them how it got there, but you take my point. It would be a venerated relic. And here it is just an anonymous country church, treasured by a few aging parishioners and one overweight American, and otherwise almost entirely unnoticed because it is just one of 659 ancient parish churches in Norfolk alone.

Altogether there are 20,000 ancient parish churches in Britain. There are more listed churches than there are petrol stations. Isn't that an amazing fact? If you decided to visit one every day, it would take you 54 years to see them all.

You hardly need me to tell you how lucky you are to have what you have in this country. Being surrounded by such a sumptuous diversity of history and beauty is a delight and a privilege, of course, but it is also a great danger. When you have such an abundance of great things, it is easy to think of it as essentially inexhaustible and to persuade yourself that it can be nibbled away at without serious loss. I hate it when people think like that.

To me, the mathematics of the British landscape are wonderfully simple and compelling. Britain has about 60 million acres of land and about 60 million people. That's one acre for each of us. Every time you give up 10 acres of greenfield site to build a superstore, in effect 10 people lose their acres. To enjoy the countryside they must go and use other people's acres. By developing countryside you force more and more people to share less and less space. Trying to limit the growth of development in the countryside isn't nimbyism, it's common sense".