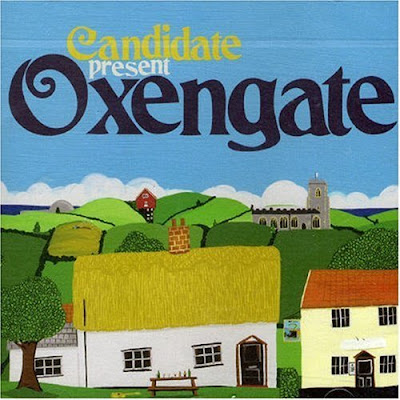 Some time ago a person I thought unknown posted a comment here recommending I check out Candidate and in particular their album Oxengate. He felt I was sure to like it.


My delight at this recommendation was even greater when I sampled said band and indeed did like them very much. Mind you, I had suspected I might the minute I read their MySpace...


'...Candidate forage for fragments of old folk songs in British hedgerows, and shove them into cleft sticks driven deep into mud effigies of John Cale. Sometimes they fasten broken Hollies albums to the side of Harry Nilsson with chewing gum stolen from Spacemen 3. Sometimes they just sit and watch bees' (!)


and Q magazine's description quoted there that Candidate are


'...just about the best available bridge between lo-fi Americana and the woody thrum of archaic Britfolk'


And so it proved. For Candidate are Fairport-Span for the Hype Machine generation (and listening to them also made me dig out my copy of XTC's superb Skylarking, but that's another story...)


What a marvellous thing this blogging mallarkey is, I mused, for a total stranger to so accurately deduce what I might like from merely feeling the vibes herein!


Er...no. 'Azarat', the commenter in question, turned out to be my brother-in-law, Big Tony.


And I didn't rumble him at all.


Not even when he sent me Oxengate for my birthday.


Still, Big Tony likes his strummy 60s folk, his real beer and his fishpond, so I guess he fits the older end of the Candidate listener demographic quite nicely; and he doesn't have a beard or anything, so we'll let him off this once.


Oxengate is an interesting and often lovely album, minute-long 'field music' interludes and all..


If you've already followed up the Epic45 threads cast by Rob at Landcroft House you might like this lot too.


[You can buy Oxengate here and the band's official website is here. Thanks Tone. Bastard.].
Posted by davyh at 3:15 pm