Take It To The Bridge 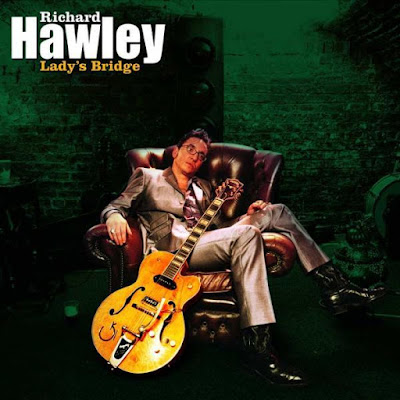 Actually never mind autumn, I seem to have come back from Lot Valley sun to a London bloody winter.

So it is good news indeed that the new Richard Hawley album came out today and I can wallow, wallow in that rainswept city street romanticism and those warm, warm vocal tones (like Roy Orbison came from Sheffield...).

I guess you can't not have heard of Hawley now given the amount of (welcome and long overdue) press coverage he's had since the Mercury-nominated Coles Corner was released in 2005 and you probably even know a bit of his history too - music under his very skin (Dad worked in the steelworks by day and played session guitar in Sheffield blues clubs by night), almost famous with Britpop nearly-men The Longpigs, a spell with the touring line-up of Pulp - but it really wasn't so long ago that RH was releasing his first solo albums without much attention from anyone at all (of these - and all are excellent - I would recommend Late Night Final in particular).

If you get a chance to see him live you MUST GO - he's superb (I will treasure for a long time the memory of the lights going down at the Shepherd's Bush Empire last May and Hawley opening a sell-out gig there with the title track from Coles Corner, a song I quite genuinely believe to be one of the greatest written in the last ten years by anybody anywhere. And some people were still in the bar!).


Anyroad up, enough of my gassing - you can read lots more about Hawley in this month's Word magazine and many other places, and this meeting with the Arctic Monkeys' Alex Turner I found rather lovely to read as I waited in the car ferry queue two weeks ago too...


Lady's Bridge is Hawley's fifth album and the third in a row to be named after a Sheffield landmark. It's his first since the passing of his Dad, from cancer.


'As a tribute to his dad the album cover features Richard in Sheffield’s answer to The Cavern, the legendary Club 60, on the stage where his father, over 30 years ago, played with blues legends John Lee Hooker and Muddy Walters'


And the man himself explains in the sleevenotes...


"I have crossed Lady's Bridge back and forth many times over the years, mainly to get to Kenny's Records on one side (now long gone sadly) or to the Castle Market on the other, both places provided me with food of different sorts. We all have to cross bridges in our lives and we all have to leave things behind that are hard to let go sometimes, pause though before you cross and watch the ancient river flow, be at peace...for a while...then move on"


Go on. Show that you appreciate hard graft, real talent and genuine passion for music and buy this record now.


And from Late Night Final....