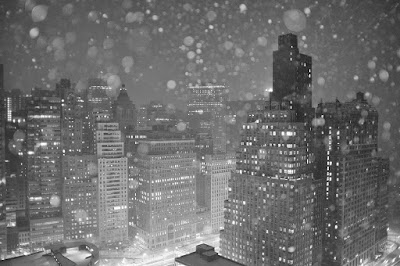 This isn't 'a Christmas song' in the usual sense but I associate it with the time of year because of the lyrics (of which more in a bit) and because I got the album it is from for Christmas the year it came out.

It most certainly falls into the category of Songs That Frequently Make Me Cry (Especially After A Few Mulled Wines); a moment when an artist's vision seems to crystallise into a single piece. It's about nothing less than the fragility of this life *gulp*- and it's all the more poignant when you learn that Kate Bush lost her mother while working on the record.

The song is full of images of precarious beauty

On a balcony in New York
It's just started to snow
He meets us at the lift
Like Douglas Fairbanks waving his walking stick.

I seem not to be alone in loving this track. It's nominated by a reader in The Word's website thread on The Greatest Bits Ever in songs ....'the last 2 minutes are all gorgeous, but when she sings 'Hey there Michael, d'you really love me?' in THAT voice. Michael's not about to say no'

I have to say I find Kate's 'official' Christmas song (from the Lionheart/Never For Ever era) a tad over-trilling - but this one does it for me every time.

Hey! Some party music tomorrow. Maybe.
Posted by davyh at 9:01 am