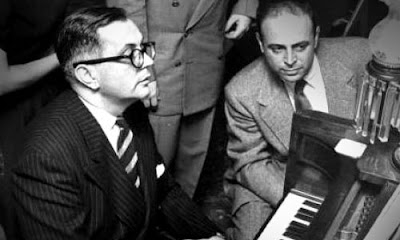 I don't imagine you'd think yourself familiar with the work of Vladimir Dukelsky, and the name Vernon Duke might draw a blank with you too.

But if you've been digging 'Can't Get Started' in the Cannonball or maybe already know vocal versions by Sinatra or Mel Tormé, if you've ever sung along to 'Autumn In New York' or 'April In Paris' or swung along to 'Taking A Chance On Love' then You Have Been Listening to the man in question.

A Belarusian émigré to the US who trained at the Kiev Conservatory, staged ballets with Serge Diaghilev, became a close friend of both Sergei Prokofiev and George Gershwin and continued to compose 'classical' music throughout his life under his real name, Duke (as we shall cheekily call him) also happened to pen some of the most beautiful standards in the American popular songbook.

Sinatra especially always namechecked him in performance. His wistful lyricism and soaring melodies are really quite something; and with Cole Porter, Johnny Mercer, Richard Rodgers and Jerome Kern as contemporaries, he was hardly running in a race of pygmies.

On Monday I started playing his tunes, but the strange thing is, I didn't make the connection...I just hopped from the perfect-for-the-time-of-year 'Autumn' to a lovely 'What Is There To Say?' as done by both Bill Evans and Sonny Rollins, to 'Can't Get Started', which I posted for feeling that way, and only afterwards did I realise all these songs were Vernon Duke's.

Then I learned from Wiki that his 'old calendar' birthday was on Sunday.

'These are the coincidences that thrill my imagination'.

As you'll tell from the crackles, the first and third are vinyl rips. Thanks to Greer, who stoked the flames of this one x
Posted by davyh at 10:30 am