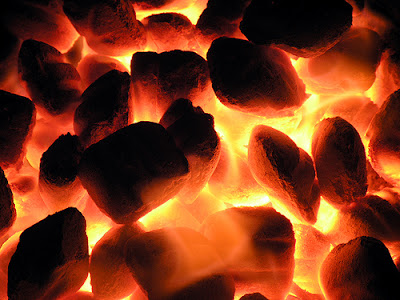 We've lived in this house for 17 years now. It's longer than I've lived in any other place. When we moved here we were an unmarried couple with one witch's cat, no kids and no furniture: we spent our first night under a duvet on the floor in an empty bedroom.

Since then we've done the usual things families do - knocked down walls and slapped up paint - but the single best thing we ever did was take the whitewashed brick hole beneath the blocked up old chimney and turn it back into a real fireplace again.

We had coal fires in our front and back rooms when I was little (and no central heating) - a real coal bunker behind the house that the coalman filled every week, great logs too sometimes that probably came from the woods - I don't remember anyone ever buying them.

The smell of coal-tar on sharp cold days was the scent (with St Bruno ready-rubbed in the old man's pipe) of my childhood.

So the fire here connected Back, but was also about Now and what we were making here: it said This Is Home; and Let's Not Go Out Tonight, There's A Fire; and Pour Yourself A Whisky DavyH And Watch The Flames. Watching the flames dance like I'd do at my grandad's while the grown-ups blethered on about the government and the cost of living and the Capitalists.

Watching our twelve year old daughter lying on her front last week with her head resting in her hands watching the flames dance while the grown-ups blethered on about the government and the cost of living and the Capitalists.