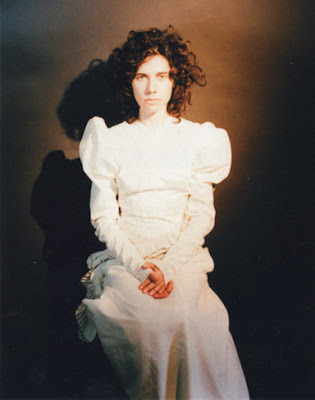 I found this review of PJ Harvey's new album 'White Chalk' in the Observer Music Monthly at the weekend really intriguing, and the 'advance tracks' that are bobbing about the internet confirm that this one's going to represent a fair departure for Dorset's Polly Jean.

She's singing in a 'different' voice, has dropped the electric guitar for (mostly) piano and all in all is coming on like a Victorian Gothic Vashti Bunyan. Nice one!

Have to say I love the title track and the single (below) though was less convinced, on first listen at least, by a track called 'Mountain' which I found more than a tad, er, caterwauly.

I deeply admire her for innovating though, and Dark Pastoral is surely the zeitgeist again now we're all snapping up reissues of Anne Briggs albums.

You can pre-order 'White Chalk' here.

[I'll be leaving these up for just one week officer].
Posted by davyh at 6:51 pm