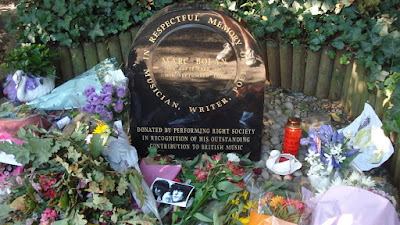 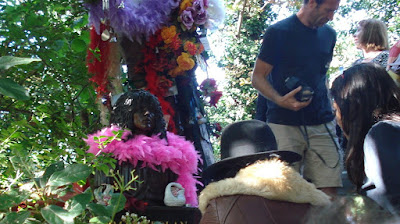 It's thirty years to the day since Marc Bolan died in a car crash on Queen's Ride, Barnes - just a mile from our house (as it was a mile from his).

I cycled over there this afternoon and joined thirty or forty people milling about in the dappled light beneath the trees by the road, reading the messages, taking each other's pictures in front of the memorial, breathing in the incense someone had lit. A few looked like original rock survivors, and maybe they were even old friends; a few others, like the girls in the pic, were young enough to be their kids.

It was all very civilized and not especially solemn; downbeat but sincere. Someone had brought camping chairs. How very British.

I saw no feather boas except the one on Marc's plinth...