Where The Railroad Meets The Sea 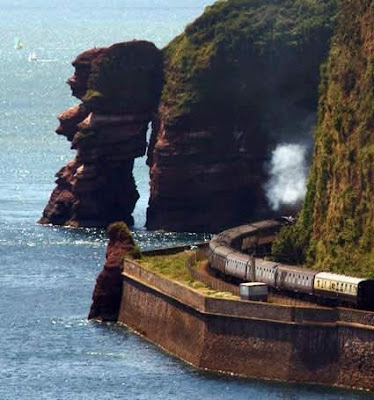 I have an unexpected day free tomorrow and in a carpe diem moment am taking the chance to visit The Aged Parents in South Devon. I'll be taking the train down from London and the journey will take me along one of the most beautiful stretches of railway in Britain - Isambard Kingdom Brunel's Dawlish section of the Exeter-Plymouth railway.

When the train leaves Exeter (last outpost of culture - a University, a cathedral, some bookshops!) it slips alongside the Exe estuary and you get this beautiful calm panorama of the river, the sandflats and the soft, distant hills beyond. At the mouth of the Exe, the train rounds Dawlish Warren, a duny sandspit with mini-golf and a few huddled beach huts, and then the drama begins; for the next few miles the track hugs the red sandstone cliffs on the right and on the left there is nothing between you and the open sea.

It's a calm day in the picture, but even on those the spray hits the train windows; on bleak winter days huge waves crash over the trains, the tracks and everything. Sea, shingle and storm debris frequently close the line. It's the most expensively-maintained stretch of railway in Europe and climate change is making things worse. There's talk of re-routing the whole section. God though, it's beautiful.

There's no interwebby in Devon: well, there is, but not in the home of The Aged Ps. So I'll be silent for a while. Back for the weekend, crashing surf notwithstanding...

Here are three very special songs that will soundtrack my journey.

And yes, I know it's about the wrong sort of station, but this seems kind of appropriate too...

[from this (more about her here), this, this and this - but I expect you knew that already]
Posted by davyh at 11:32 am