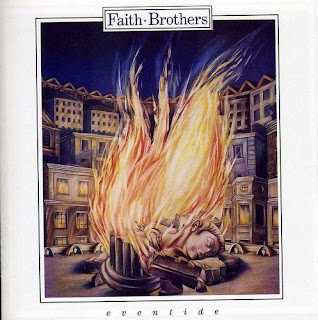 If you've been hanging around here for a while (and I do sympathise) you might remember an anciente poste of mine about those fabulous Fulham nearly-men The Faith Brothers.

'...they were a fabulous band, especially live - all soaring melodies, urgent brass, elatory vocals and humanistic commitment. Lead singer/writer Billy Franks was a passionate and charismatic frontman - even when long after the band's glory days (supporting The Alarm!) performing to a few hundred with his soul band in 'The Leather Bottle' pub in Wimbledon Chase'.

A number of us remembered Billy as an excellent singer and were rather thrilled, but perhaps not too surprised, to discover that he was also a very groovy guy, prepared to offer downloads of the long out-of-print Faith Brothers albums from his personal website and asking only voluntary donations for the same.


Less happily, in a way, he was also playing free gigs on Sunday nights in a Shepherd's Bush boozer...


Well, I've very much enjoyed having The Faith Brothers back in my listening roster this year after so long (all their music I had was on lost or unplayable cassettes) and was thrilled skinny to learn this week from Billy's site that he has booked the 2000 capacity Shepherd's Bush Empire for a gig in May 2008 and is 'hoping to fill it'.


Here's what I think - 1) everyone who remembers the Faith Brothers or Franks' solo work with any affection should help publicise the gig - word of mouth is a powerful thing and the word of the blogosphere may be more powerful still 2) anyone within reasonable travelling distance of West London should be at it. I will! (cheers, thanks for asking, mine's a pint).


Oh, and in the unlikely event that you are a live music marketing guru with time on your hands and a philanthropic bent, perhaps you could give Billy a bell? I get the impression he's doing all this by himself at the moment...

[this fan site isn't going to win any web design awards - but hey! it has a discography!]
Posted by davyh at 4:00 pm