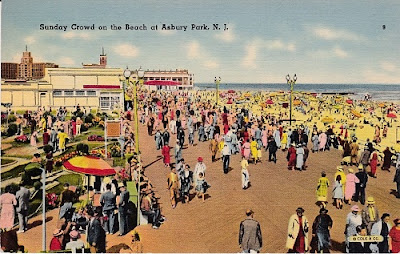 ASBURY PARK, N.J. (AP) - Bruce Springsteen is paying tribute to a boardwalk fortuneteller he made famous in a song. Madam Marie Castello, who told fortunes on the Asbury Park Boardwalk in New Jersey, died recently. She was 93. Springsteen wrote about her in his 1973 song "4th of July, Asbury Park (Sandy)". In a posting on his Web site, Springsteen remembers Castello as a boardwalk fixture at the Temple of Knowledge."I'd sit across from her on the metal guard rail bordering the beach, and watched as she led the day-trippers into the small back room where she would unlock a few of the mysteries of their future," he writes. "She always told me mine looked pretty good - she was right". Springsteen adds: "Over here on E Street, we will miss her". On the Net: http://brucespringsteen.net/news/index.html


I misspent my teens in a British seaside town and spent many a summer 'banging on them pleasure machines' but Asbury Park, New Jersey sounded like an impossibly bigger-budget widescreen remake of the cathode ray tube view I had in Paignton, Devon - the vistas sweeping, the cars and the girls sleek and fast and the boardwalk long, long, long. We had a pier. Still, Bruce knew too he had to get out or get caught, and he was right, I knew he was right, because so did I.


You can almost smell the candyfloss ('cotton candy'?), frying onions and generator two-stroke in this and I know the stuff is easy to parody and a soft target to mock, but damn it I liked Bruce when he was all epic/poetic.