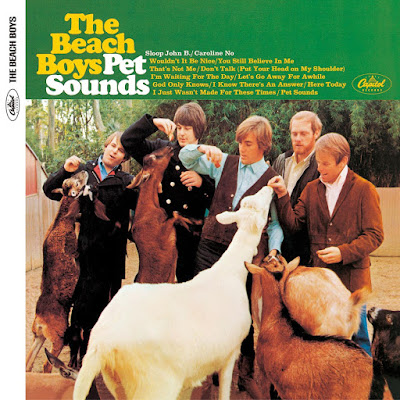 The only album I think I have owned on tape, LP and CD, I first bought it in Paignton Woolworths when I was about 16 - it was on EMI's cheapie reissue Fame label, I assume because no-one much wanted it and, my, how the times have changed. Now you can buy it in Mono and Stereo versions and 4 disc box sets with unreleased outtakes and vocal samples and backing tracks and Brian Wilson's dog barking and his Mum shouting for him to come down from that studio, his tea's ready (not really, but, you know, almost).


Back in '81 I'd taken the cassette home, shoved it in the Tandy and thought it sounded odd - sad, slightly off-kilter, unorthodox and not at all, apart from 'Wouldn't It Be Nice' and 'Sloop John B', the Fun, Fun, Fun Beach Boys a person heard on the Radio One Roadshow Live From Torre Abbey Meadows, Torquay, With Your Host Mike Read (and Smiley Miley).


I was shacked up with the boys from college in a dodgy ex-council house in dodgy SE London by the time I bought the LP version - it reminds me of a sunny Sunday morning of big mugs of tea with an overnighted Dr Al and his girl, when we listened to this together for the first time too. It may have been paradise for Jack and Jacqueline.


And by the time the CD came I had heard the 'SMiLE' bootlegs and we knew that this was all done by Brian on his own, the Boys touring Japan - that they got back and he presented it to them all but finished, just asked them in for some vocals here and there, though he later wiped even some of them and re-did them solo.


It's the record I really had in mind the other day when I wrote that bit about great summer art containing the sadness of anticipated autumn, and you can definitely load the metaphoric autumn on this one; 'SMiLE' ("Brian's ego music" - Mike Love) would collapse around Brian and him around it - and summer? Never, never such innocence again...