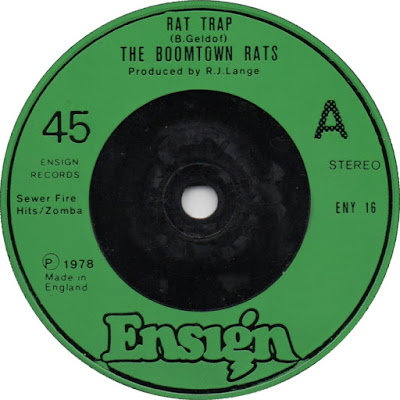 Friday night and I'm 13 years of age - rushing my tea down (Mum's fish and chips), begging the old man for a lift: off to 2-3 Club and the school disco... and this.


I thought it thrillingly original when I first heard it - the tense little guitar and piano intro, the big-riff saxophone rush to the West Side Story finger snaps and groovy bass line, the lyrics about a world we actually lived in ('little Judy's trying to watch Top Of The Pops') the dramatic shifts in tempo and melody - and it used to go down a storm in the lights-out school hall as the Class Outsider flailed his scrawny limbs and twisted his four-foot-nothing frame into weird shapes to narrate the whole thing from the centre of the dance floor like the manic lead of some avant garde ballet troupe.

We loved it. It was an epic. It was our epic - big and dramatic and clever but (cake-and-eat it!) apparently New Wave too! Johnny Fingers wore pyjamas in the street! WILD!

Then we heard early Springsteen and Thin Lizzy and we started to realise that Geldof was really not much more than the sum of his influences. And seriously pre-punk (oh! the shame of it!).

And within a year or so, he was definitely uncool and Rats singles were commonly to be found in the 'reduced to 30p' box in Woolies...