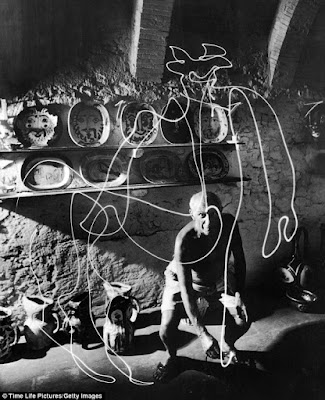 The story goes that in his 80s the great artist Pablo Picasso is invited onto a TV talk show. The talk show host thinks it would be a wheeze if Picasso creates a work of art during the show's live transmission. Picasso agrees. They cut to another item for a few minutes and when they return to Picasso he has completed a simple pen doodle on the paper supplied him.

'Well come off it Mr Picasso' says the talk show host. 'It's taken you maybe two minutes to do that drawing, but it would probably sell for a million dollars. How do you feel about that?'

Picasso looks him in the eye and says

I feel the same about this simple sketch by a musical artist often compared to Picasso (whom he very much admired).

On the surface it's a simple instrumental version of a decent little pop song.

But listen carefully and you hear 60 years of artistry and emotion inside it.

I've posted the original too because feckit, I quite like that as well.

[The Miles originally from this and the Cyndi available on this]
Posted by davyh at 9:26 am