Some Songs For Dark November 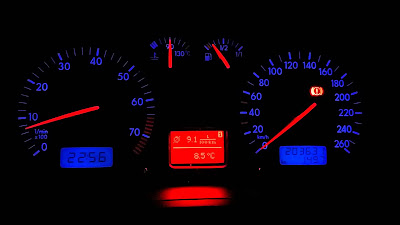 We had a night drive out of London and into The Country to make on Saturday, and because I can't plug my iPo into the car stereo (why isn't this standard in all motors by now?) I decided to shove 10 songs I'm currently liking onto a rewritable CD for the journey.


It's been a while since we've had a song list here and I know how much you like one; it struck me that the tracks on this CD pretty much sum up what I'm into at the moment and taken together have that requisite sad, dark, late November feel to them.

Listing them also gives me an opportunity to thank a couple of blogger companeros for recent musical introductions (if they'll forgive me reposting their stuff) and announce my first discovery from Last FM, which I finally got going with properly last week (from now on, should you wish, you can follow what I'm playing via the Last FM widget thing on the right there in the sidebar. What larks.)

David Sylvian - 'Darkest Dreaming' (1999)
From this. And if there's a better dark-winter-night-song, I haven't heard it.


Hooverphonic - 'Circles' (2007)
Result! A few hours after downloading the software that connects (ahem - 'scrobbles') what you're playing in iTunes to their site so they can hook you up with musical 'neighbours' Last FM introduces me to this band. Still looking to chart their landscape maaan but boy, do I love this. They're Belgian, have been around since the mid-90s, and this is from their new LP. Site here.


Catherine Howe - 'Up North' (1971)
Unspeakably gorgeous to my ears and I have the lovely Beth to thank for the introduction. There's a bit of a Vashti Bunyan story to this: former actor Howe recorded this album in 1971 on an independent label which soon after went bust - the album lay largely unheard for thirty years until recent re-release. She did have a radio hit in the mid-70s with the song 'Harry' which Terry Wogan liked a lot, but you shouldn't let that put you off. More here.


Emma Pollack - 'Paper & Glue' (2007)
I didn't have a lot of The Delgados stuff but always liked what I heard. This leapt out at me from a live session she did on Radcliffe and Maconie's prog last week.


The Killers - 'Romeo & Juliet' (2007)
I suppose that after the Springsteenisms of Sam's Town, a Knopfler cover was inevitable. From this, their Hatful Of Hollow, which perhaps Santa will bring me. Inexplicably sound - but it always was a good song, as my good friend Mart and the Tutu Vicar will surely attest.


David Sylvian - 'The Scent Of Magnolia' (1999)
I'm sort of obsessed with Sylvian right now - it's an autumn thing. This is an out-take from Dead Bees On A Cake and I have the tireless Jon at The Vinyl District to thank for bringing it to my attention.


Tom Waits- 'All The World Is Green' (2002)
Tom Waits - 'Take It With Me' (1999)
And if it's not Sylvian at the moment it's gonna be Tom. Reading this is inspiring me to plug many gaps in my Waits collection; Toad getting sentimental about 'Take It With Me' helped too... From this and this respectively, but you knew that.


The Teardrop Explodes - 'The Great Dominions' (1981)
Ah, the last and greatest track on Wilder - headphone music from when I was 16. And was it in The Guardian's 1000 albums list? Was it heck. Though Kilimanjaro was, to be fair.