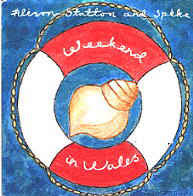 What a relief. I thought it was the 300th and had got all worked up about having to find a 'theme', discovering that if you Google '300' you end up with about that many references to this film, which by the way I had never heard of before, and er...not much else. I'm not even familiar with the number 300 bus route in East London, and there's always a good story in a bus route isn't there?


No, no. Delete that abandoned draft post still cluttering up the list and we're back to a nice, free, anything goes 299 today, leaving the third century for Friday, where I can't help but feel it most properly belongs.


So... this arrived, and I've been enjoying it very much, not least because I thought I'd heard everything Weekend had ever made (which isn't hard) but this is like listening to a lost original album (though most of it's from about fifteen years later).


My favourite things on it are the bonus tracks which originally appeared as the Alison & Spike EP 'Weekend In Wales' (nod to the history). Here are two of them; they sound dead right for a sunny London morning that's burst in on the memory of an early week of rain.