Do You Remember My Face? 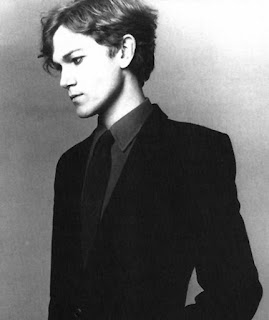 Peter Gabriel – Genesis (‘Was feeling part of the scenery/Walked right out of the machinery’, etc)

Foxx (real name Dennis Leigh) trained as a graphic artist - a career to which he returned in the 1990s having quit the music business. He had been active on the glam scene from as early as 1974 with his band Tiger Lily, once tried out as vocalist for the nascent Clash (then known with Year Zero tastelessness as The London SS), fell in love with the music of the electronic avant garde and Kraftwerk, formed the band Ultravox! (always with an exclamation mark) and enjoyed critical acclaim, hipster status and the production services of Brian Eno on Island records for two years before being unceremoniously dropped by the label in 1979.

Signing to Virgin as a solo artist, Foxx released ‘Underpass’ (MP3), which peaked at number 31 on the singles charts. Subsequent singles grazed the lower reaches of the Top 40, then later only the Top 75; albums picked up some plaudits, but failed to substantially scratch the consciousness of either post-punkers or synthpop kids.

Meanwhile Ultravox regrouped, dropped the ! , hired a guy that used to sing in a teen band and.....“Aaaah, Vienna!”…

I always thought Foxx was interesting and loved his cold, alienated keyboard landscapes and chipped vocals – a major influence on (the also much more commercially successful) Gary Numan.

I had the free-with-Smash Hits yellow ‘flexidisc’ (!) of an obscure Foxx track called ‘My Face’ (MP3) for many years before the crease it sustained in the mail finally made it unplayable, and though we did nickname it ‘Underpants’ at school, his debut stuck with us more than its chart position would indicate.

It is surely time for a Foxx revival. I would like to start it here.

Five quid gets you this budget compilation – a sterling slice of the best of Dennis Leigh from the synthrock 80s through the rather marvellously ambient 90s. It includes 'My Face' !!! Buy!