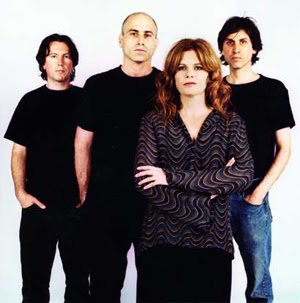 Glad tidings reach The Ghost that a new Cowboy Junkies album, At The Ends Of Paths Taken, is scheduled for release in mid-April. Three (rather excellent) tracks from it are streaming right now at the band's Myspace page.

I've had a soft spot for the Canadian siblings' low-key lyrical blues ever since 1988's seminal Trinity Session, which was recorded, as Wikipedia gleefully notes, 'live in a single day on a single microphone in a church in Toronto' and I suppose is most famous to the world at large for featuring a cover of the Velvet Underground's 'Sweet Jane' which Lou Reed described as his all-time favourite version of the song (it's based on the longer, slower reading of the track that Reed began performing live in the late 60s).

My desert island CJ track though (and I suspect many other people's) would have to be 'Sun Comes Up, It's Tuesday Morning' (from 1990's Caution Horses) a song whose lyric brilliantly evokes the mash of emotions (sadness, loss, relief, the comfort of returning-to-self) that follows a relationship break-up. I have a friend who once gave this to a girlfriend he'd just dumped - which seems a bit harsh, now I come to think of it...

Always cultish, never especially hip, the Junkies have doggedly etched out their very particular alt. musical groove for twenty years now, even releasing their recordings themselves since the late 90s.

Here's a smattering of tracks from their illustrious past.

Cowboy Junkies - 'Sun Comes Up, It's Tuesday Morning' [Radio One session 1989]
(from The Radio One Sessions)

Cowboy Junkies - 'A Horse In The Country'