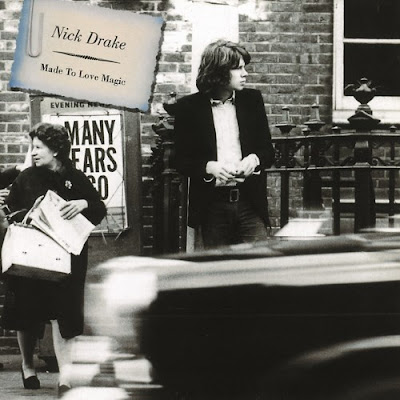 I nipped into our local Notting Hill Housing Trust charity shop on Saturday to peruse the second hand CDs, and there amongst the usual Uncut magazine giveaways, 90s dance mix compilations and East 17 singles, I found Made To Love Magic by Nick Drake - for £1.

This is not a rare or amazing record but I think you will agree it was being sold at a rare and amazing price, so I bought it.

Accusations of barrel-scraping were levelled at Island/Universal when this compilation of studio outakes, demos and reorchestrated tracks was released in 2004, mostly because the truly sought-after stuff had already been given a respectful first airing on a bonus CD included with the 1986 Fruit Tree box set (and released separately a year later as Time Of No Reply).

Famously, Nick Drake released only three albums in his lifetime, none of which received much critical attention or any commercial success at the time.

His unreleased recordings are also thin on the ground - solo demos recorded by his friend and future orchestrator Robert Kirby at Cambridge; rough self-recorded tapes made at his family home in Tanworth-in-Arden (bootlegged, much to the distress of his family); outtakes from the studio albums, especially the debut Five Leaves Left (buy); and four songs from his final studio sessions in 1974 for an intended 4th album.

Given how little we have of Nick Drake, there's something of interest, and much to enjoy, in all the songs - but for me the stand-out tracks are those recorded for, but left off, Five Leaves Left. It's a mark of the quality of the released material that songs of this standard were not considered up-to-scratch: hard to imagine an artist or producer leaving them off an album these days, especially not with 60-70 minutes of CD space to fill (the original LP lasted just 42 minutes).

The album we know is, of course, perfection - and now appears routinely in all those Greatest Albums Of All Time lists.

How different it was in the dog-days of the 1960s when a quiet, upper middle class Cambridge undergraduate with his intricate guitar stylings and opaque, melancholy lyrics went largely unheard by a world with the electric blues ringing in its ears...

All tracks recorded November/December 1968 and available here; an excellent biography of Nick Drake by Patrick Humphries available here.
Posted by davyh at 10:00 am