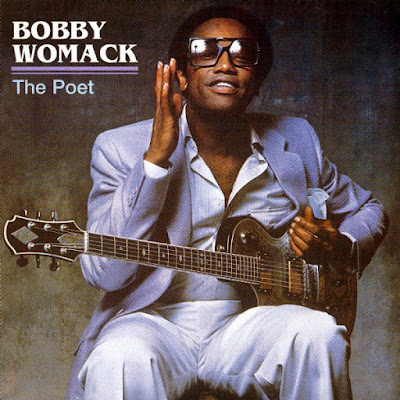 My mate Wayne grew up in Tunbridge Wells, Kent, England. Came of age back in the early 80s. Had a wedge haircut and wore soul-boy shoes and white socks. Was a Number on the Scene. Liked a bit of the old jazz funk: early Level 42, Spyro Gyra, Weather Report - maybe a touch of Luther now and then.

Now he’s 40-something and on a P&O cruise of the world; a few weeks ago we received a card from him in Buenos Aires, and I think he’s somewhere off the coast of Australia now. As far as we know he isn’t playing fretless bass in the house band, but you never know with Wayne.

It’s largely down to Wayne that I own the 1981 Bobby Womack album The Poet, which is something of a genre masterpiece.

At a time when the best soul/funk music of the period that the excellent Art Decade calls ‘the long seventies’ had pretty much played out, and before soul/pop saviours like Prince had really established a foothold, where hip-hop and electro had begun to flourish (even Marvin Gaye’s music would be synth-heavy on 1982’s Midnight Love album) but traditional horn-heavy and heartfelt soul melodies seemed to be a thing of the past, this recording from an artist whose best work many had considered to be behind him was a massive, and surprise, hit.

It’s a fabulously atmospheric, emotionally-wrought and gutsy late-night soul album that stands with the best of its kind and proved hugely influential on much of the 80s ‘groove’ scene.

Throughout, Womack’s voice is full of raw feeling, and his guitar work is terrific.

If you dig real soul music, you should invest.

And raise a glass to His Womackness, who’ll be 63 on Sunday.

Here are two sample tracks from The Poet, plus the bonus of the 1976 single ‘Daylight’ – because it’s Friday, and this is a staying-up-thru-Saturday kind of record.