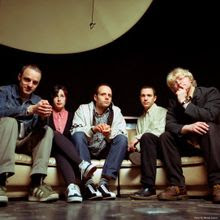 As his regular readers will know, the inestimable Colin from And Before The First Kiss is away at the moment, but as he has been a tireless and sincere champion of the music of Robert Wratten I'd like to think of him as a benevolent and groovy spirit at the table of this post.

I mentioned back here that I'd been listening to a lot of The Field Mice lately - it was Colin's samples that got me downloading from emusic and elsewhere - and I've also been tracking down and loving the music Wratten made post-Field Mice with Northern Picture Library and, now, Trembling Blue Stars.


Well, a story that began for me as a paddle into the back catalogue (I still don't know why I didn't hear of and hear Wratten's 90s music at the time) has come bang up to date now with the release of a new album from Trembling Blue Stars called The Last Holy Writer and my purchase of same using the quaint method of (ah! nostalgia!) handing over a few grubby fivers in a high street record shop.


It is a work of melancholy loveliness and I think this is the best thing on it...

Given those lyrics - A song on the radio/Makes you shiver/You want to curl into a ball/Makes you want to be 17/And forget the future's shrinking - it's spooky that the song reminds me so much musically and thematically of this...

[Trembling Blue Stars MySpace is here - look out for free downloads now and then - and the new album is here and other places. The pre-history of Bobby Wratten and his music is here. Oh, and you can get the Weekend track on this. Yes, yes Young Marble Giants - but let's get the Weekend revival going now].
Posted by davyh at 6:11 pm