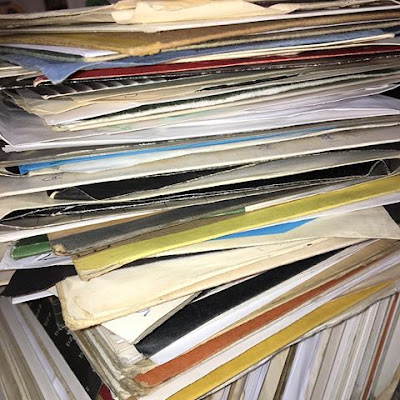 If you grew up like me in small provincial towns in the days before the internets, long, long my friends before the internets, you'll remember how hard it was to find the records you liked. In my teenage years in Paignton, Devon we had just one proper record shop and a very small, inadequately stocked one at that (SOUNDZ: owner's catchphrase -'It's coming in Monday') and sometimes in desperation I would be driven to frequent card shops and electrical retailers just for the few singles they might sell at the back. Imagine it. You would hear groovy tracks on Kid Jensen or Janice Long or Peel or Mike Read's breakfast show and you would know you would not have the proverbial snowball's chance in hell of finding them in the bloody English blasted pigging bloody so-called Riviera, oh no. It was a mighty bore I can tell you.


I started going off piste, as it were.


I worked out that away from the town centre there were funny little bric-a-brac shops smelling of musty Pan paperbacks and old tins of St Bruno ready-rolled, and whilst I knew I'd never find 'The View From Her Room' by Weekend there, it did become clear that if you called in often enough, and steeled yourself for the disappointment that nine visits in ten would inevitably bring, sometimes, one time, right out of the blue, you might find amongst the pensioner-donated Vic Damone Extended Plays in that naggedy cardboard box a crackly old soul or funk single some forty-something bloke who used to run a disco had been forced by his missus to dump.


It doesn't sound like much, does it - but at the time it was water in a parched desert to a thirsty man. They could go on playing their bloody 'Don't You (Forget About Me)' in those tawdry Torquay 'nite spots'; I had found a record that was all mine.


This is one of those records.