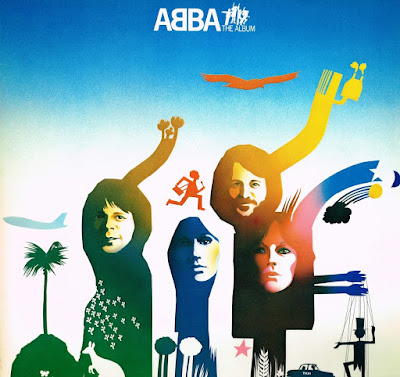 I was 11-12 in 1977 and I wasn't listening to The Clash, Pistols, Stranglers, Damned or even (yet) The Jam, I was listening to this and in love with it very much.

Me and my mate Steven from next door-but-one had seen ABBA - The Movie in our (very) small town cinema and it had proved most, most exciting for us. After all those hours spent poring over the pictures in ABBA Magazine (an A5 glossy like Starsky & Hutch and the reissued Beatles Book, which we also devoured hungrily) to finally see them (well, sorry, yes, mostly the girls and specifically, sorry again Frida fans, Agnetha) 'backstage' - moving! talking! - to be intimate with them like the silly Australian reporter fantasises, well it was quite something I can tell you. The Eagle sequence in the elevator? The Name Of The Game stuff at the picnic in the park? Fabulosa.

To this day I consider The Album a magnificent pop record, even allowing for Bjorn's ridiculous talky bit on 'Move On' and also for 'Take A Chance On Me', a song I never much liked though it was number one for weeks and everyone else seemed to think it was terrific.

Anyway. My favourite bit then, as now, was the concluding sequence of songs described as Three Scenes From A Mini Musical: in which, plot fans, a blonde girl (the girls both wore wigs onstage) who 'began to sing long before she can talk' ('Thankyou For The Music') leaves her smalltown home ('I Wonder (Departure)' - Frida's finest hour) seeking stardom, only to find that 'fame' is to become a singing, dancing marionette on a endlessly spinning carousel she cannot escape (a song called 'Get On The Carousel' appeared in the mini-musical when the group performed it live, but only made the album as recycled fragments for 'Hole In Your Soul').

All three songs are wonderful, but 'I'm A Marionnette' with its dystopic vision of pop celebrity and its swirling, discordant chords and frantic guitarry bits is as musically and thematically adventurous a thing as they ever produced, and genuinely I think as corruscating a piece about 'fame' as anything by Bowie or Public Image You Got What You Wanted Lydon (another record I absolutely, absolutely ADORE). Mr Shuffle shoved it at us the other day and it stopped me in my tracks in a 'feck me that's a cracker' moment and I said so and Mrs H, who had been upstairs changing the beds, said 'That's funny, I was just thinking the same'.

So here it is.

More of this sort of thing later, I shouldn't wonder.
Posted by davyh at 12:32 pm