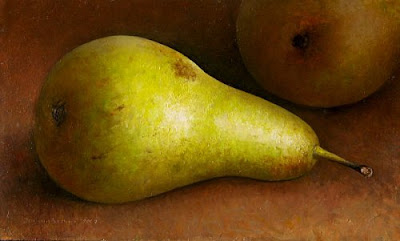 Cooked this tonight for Mrs H - last time we made it, it was for friends that have long since gone (er....to Merseyside, not the Great Beyond) ; first time, it was when we had the Aged Ps up to London from Devon on the event of the first birthday of the first daughter and my Mum said 'Well, I can't believe Dave cooked something like that" which she meant, and I took, as a compliment.

This time though, of course, I had the girls helping, but had to explain that 1) whilst Delia has good cooking ideas she is 2) a bit over-fussy, and there's no need to follow her to the letter, you know....Improvise around a stated theme, maaaan - it's a jazz thing, baby.

Anyway, it was nice.

Though our bastard dishwasher has broken and there's a hell of a lot of washing up for tomorrow.

From the 'Italian Job' OST, and, I think, Art Decade, originally....thank you New York!

Painting by Jos Van Riswick.OK. I'll shut up about cooking for a bit now.