Get The Funk 'n' Holiday In Here! 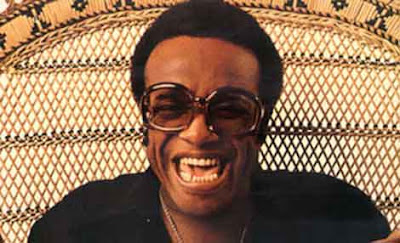 Since this one's a Bank Holiday weekend in the UK I feel something special is called for in the 'funk in here' zone.

I know many of you dug the posts here from Bobby Womack's legendary Poet album and because I love ya each and every one I thought some stuff from the snappily named 1984 follow up Poet II would set your break up nicely.

Like Marvin Gaye's Here My Dear this was a 'contractual obligation' album. Womack had wound up in a dispute over royalty payments with Otis Smith, the founder of the indie label on which The Poet had been released, and the settlement required the release of one more album. Rather than deliberately sabotage the project with mediocre songs, or use it to detail bitter recriminations and hurt as Gaye had done (HMD being the divorce settlement for Motown boss Berry Gordy's daughter Anna), Womack plumped to make an album that would replicate the success of its predecessor, consolidate his new-found critical and commercial position and ensure all the major labels would trip over themselves to sign him. And so it came to pass. Aside from a couple of duets with Patti Labelle that don't quite come off (and don't get me wrong, I love her voice, I'd just prefer to hear these songs sung solo by Womack) it's a cracker - with Womack's voice rawer and the total sound at times even punchier (because of, or despite, synths?) than Poet.

My advice for tonight is to crack open a cold one and if you're cooking, add Tabasco.

In other news this week...

Emmett and the guys at the quite brilliant Art Decade announced they were taking a month's sabbatical. Since AD is a blog I visit daily, and since I always find something startling, wonderful, funny, unusual, unpredictable or brilliant there, and sometimes something that is all of these things at once, I will miss their posts madly. My consolation is that if the guys have a month free from blogging they will have more time than ever to rummage New York City's racks of lost vinyl and that we will all be the richer for it when they return.

Emmett posted a comment here to tell me that the John Barry tune I'd uploaded got iPod-shuffled at him on the New York subway: since the piece was entitled 'Nocturnal New York' this seemed rather wonderful. Myself, I spent a blissful hour cooking in my SW London kitchen a while back whilst groovin' to Jack McDuff tracks that Emmett had ripped from second-hand vinyl bought that afternoon on the streets of New York....

Isn't this blogging thing FAB?
Posted by davyh at 8:53 am