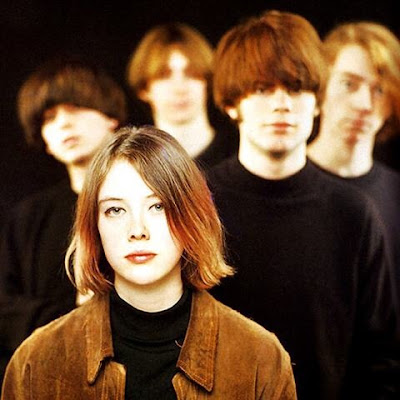 If Curve's dodgy session-hack/pop tart past compromised their indie cred with the cool crowd despite the righteous racket of their music at its best, Slowdive seemed more reputable. Signed to Creation for a start, which always helped, they took less of the jet engine noises and feedback squall from scene progenitors My Bloody Valentine but more of the gossamer melodies you could find in there somewhere, and more than a little too of the swirly harmonies and wave-like rhythms of the genius Cocteaus.

Some of their stuff was positively, er, ambient.

For this reason, and the fact that they could cough up a good tune now and then, I find their stuff has aged nicely.

That there was a core of genuine talent in this band seemed also to be borne out by their longevity, if not as 'the Dive' (!) then as the reduced personnel Mojave 3 and later in the solo work of the lovely Rachel Goswell and the very talented Neil Halstead. The Halstead track here, a kind of Nick Drake piece for a 90s comedown, is certainly one of my favourite things of its kind. I have it on a Chris Coco/Rob Da Bank Blue Room mix CD given away with the now defunct Muzik magazine. I'll get to play it to a lovely sunset one day.

The Rachel album's pretty good too.

(Buy Slowdive here; Rachel's MySpace is here and Neil's here. While you're at it, Chris Coco's site here).
Posted by davyh at 6:17 pm