Get The Funk 'n' Revolution In Here! 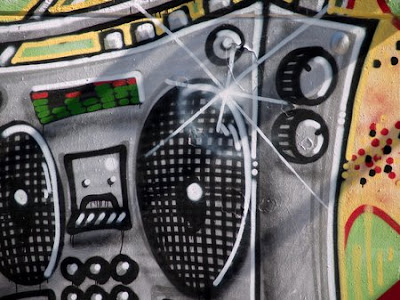 Some rare old school hip-hop for you this Friday (thinks: wonder how many readers I've just lost with that opening line...).

I first came across this when it appeared on The Mighty Reel cassette given away with the NME in 1982 (scroll down this page for track listing) and lent me by my mate Cool Jim.

I owe more to Cool Jim than he will perhaps ever know because a) he always heard cool things first and played them to me (I recall as if it were yesterday gathering by his turntable in his bedroom on a sunny afternoon after school as he plonked the needle down on Weekend's View From Her Room) and b) his mum had the coolest hippy record collection ever, and one we freely plundered (it contained Jefferson Airplane's Surrealistic Pillow - an album I would list in my all time ten - After Bathing At Baxters, strange things by Donovan and lots of mid-period Dylan; Jim's mum also happened to be drop dead gorgeous, but let's not go there).

Anyway, back to the tape; this track leapt out at me from the others, though many of those were also excellent (sad that this and other early funky/post-punky NME tapes get few dues nowadays while everyone falls over themselves to laud the later, and much less eclectic, C86).

Enthusiastically, I shoved it on the end of a C90 of bits from Peel shows....and I still have it, though it doesn't play too well now. But it wasn't until last year when this compilation of early New York hip-hop was released that the track became easily available again.

Originally released as a 12" single on the Clappers label in 1980 (if you own it, insure it) it's an early and excellent example of 'political' hip hop, one of the first attempts to do something with the genre other than brag about rhymes, girls, cars and dick sizes.

That alone would make it interesting, but possibly a tad dull too - however, brilliantly, Brother D exhorts his audience to 'agitate, educate and organise' over a fearsome sample (re-recording?) of Cheryl Lynn's 'Got To Be Real' , thereby pulling off the old cake and eat it trick of making a record about the dangers of apolitical socialising that's great to dance to!

So....whether it's an old friend you kinda lost touch with, or something you've never heard before, I hope you like it.


Have a good weekend. I'm off to Disneyland Paris with the kids tomorrow (oh, the contradictions....).
Posted by davyh at 8:55 am