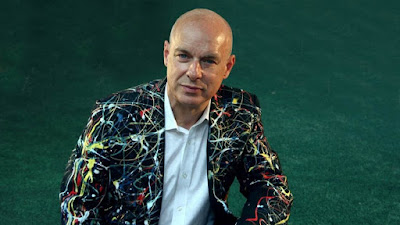 inspirev.tr. 1. To affect, guide, or arouse by divine influence 2. To fill with enlivening or exalting emotion 3. a. To stimulate to action; motivate b. To affect or touch 4. To draw forth; elicit or arouse 5. To be the cause or source of; bring about 6. To draw in (air) by inhaling 7. Archaic: a. To breathe on b. To breathe life into. v.intr. 1. To stimulate energies, ideals, or reverence 2. To inhale.

This is a contradiction - I'm lacking in inspiration at the moment at the same time as being inspired by everyone around me.

All week I've been loving and repeat-playing the Japan and Sylvian-related stuff at Mick's joint (love the Mick Karn), whilst grooving to the American home valedictory zip from Liz. The Pauline Murray & The Invisible Girls album London Lee motivated me to order from Amazon Marketplace finally arrived from Illinois (!) and Colin's Great Northern are on rotation play in the car. Grinderswitch are 'Picking The Blues' on my iPod after Steve revealed that theirs was the theme to John Peel's show and I have rediscovered 'Joan Of Arc' big time thanks to the Tutu Vicar. As for Ally - well, I never know WHAT she's gonna come up with next and WHERE she gets those Smash Hits and NME clippings from (yes, don't tell me - old copies of Smash Hits and the NME, very funny - but my Dad BINNED all mine). And then there are the words and the thoughts and the insights and the rants and the rarities and the enthusiasms, old and new - from JC, and Darcy and ornery old Toad....

What am I saying?

Well probably just, in the immortal words of Sir Bjorn Ulvaeus....'thank you for the music'.

Please visit these people if you haven't already - comment on their stuff, give them some love, disagree nicely sometimes too, if you must.

And then - maybe have a go yourself.

We all did because someone else had before us.

'Open up your eyes and ears and yer influenced, and there's nothing you can do about it' - Bob Dylan.