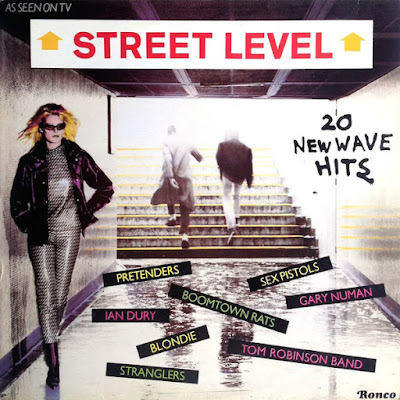 I have long enjoyed this very Friday 1980 compilation of punk, post-punk, new wave and chart pop from the legendary label, mostly I think because it brought together a whole bunch of good stuff from the time, and back then not many LPs did.

I am certain it was never hip, since 1) by 1980 the cognoscenti had long moved on from this sort of thing 2) there are one or two very strange things on it that don't belong here at all (The Nick Straker Band - 'A Walk In The Park' ??) 3) it's on bloody Ronco for chrissakes!!! I mean, Live At The Roxy '77* it ain't, but nuts to all that, I love it.

Where else until the majors started knocking out all those retro new wave compos in the noughties can you find The Skids 'Circus Games', Magazine's 'Sweetheart Contract', The Members 'Sound Of The Suburbs' and The Sex Pistols 'Pretty Vacant' all in one place? It's got Gary Numan on it doing 'We Are Glass' and some John Foxx too! And isn't the cover hilarious? Yeah, well street there Ronco.

Pah! For a fifteen year old in a sleepy seaside town with a red bulb in his bedroom, it was the bollocks. And in many ways for a 42 year old in a leafy corner of South West London, it still is.

The full track listing here. And for your delectation today...