Six Satsumas And Some Disco 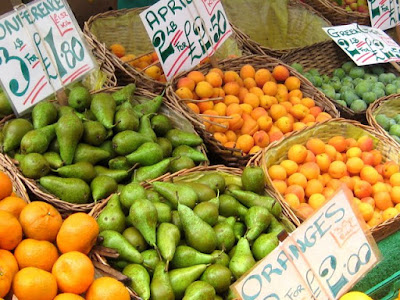 Did you buy LPs when you were a young teenager? I didn't; they were too expensive and for grown-ups. I bought singles, and sometimes when I couldn't even afford to buy them new, I bought them secondhand - at Ronnie's in Torquay Market, just across from the shoe repair bar and along from the fruit and veg. To this day I associate the indoor market smell of cabbage-leaf rubbish and fresh-produce cardboard boxes with groovy new wave, pop and disco singles; at Ronnie's you even came away with them in brown paper bags, like apples and pears.


This was a Ronnie's purchase (25p I think) and I have always loved it - it's very Friday night to me, conjuring up a glamorous urban landscape of all-night dancing and neon lights reflecting off shiny car roofs. And it's got those electronic percussion things that go 'boo!' on it too (they were all over records by 1982 but not so common in 1978).


I can't for the life of me see why this track's on the first of Sean Rowley's Guilty Pleasures compilations. As I've written here before, I think the guilty pleasure is a dubious concept anyhow, but even if you accept the premise that some records are too 'uncool' to admit liking but addictive anyhow, I hardly think this belongs in the category with 'The Pina Colada Song'. And I bet you didn't know Julian Marshall (keyboards) went on to be in The Flying 'Money (That's What I Want)' Lizards?


Anyway, this song was everywhere in the summer of 1978, a big hit in the UK and US, and perhaps it'll transport you back to those heady days if you play it tonight. Those electro crashes and 'boos!' work beautifully with sound-responsive disco lights, and may I suggest a bit of 'Oliver's Army' to follow, by contrast? 1978-9 was all about contrasts.


[According to the interweb, Ronnie's is still going in Torquay market - they sell CDs now, of course]
Posted by davyh at 9:21 am