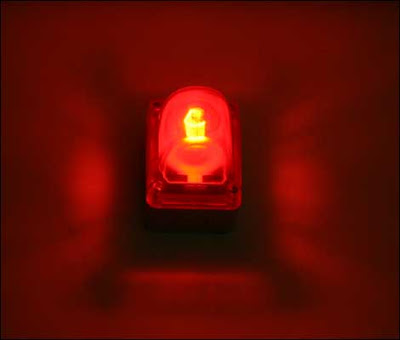 We dropped in on the Aged Ps when we were down in Devon. They're OK. They're Aged. Mum's had a stair lift installed and the girls had a right fine time travelling up and down on it. Father's thrown out still more stuff, stripping the house down to its bare bones 'so we won't have to' when they're 'gone'. I went upstairs to the junk room to see if the little wooden desk my Uncle David made I used to do my homework on was still there, and it reassuringly was. I had a look in the drawers to see Dad had chucked all my 6th Form satirical-and-music-review notebooks, my pre-blogdays blogs. But a little red lightbulb rattled around on the wood on its own.

I knew it so well - it was the actual one I told you about here.


Something I would've been playing in dark Westcountry night circa 1980; bin headphones on, red lightbulb burning...