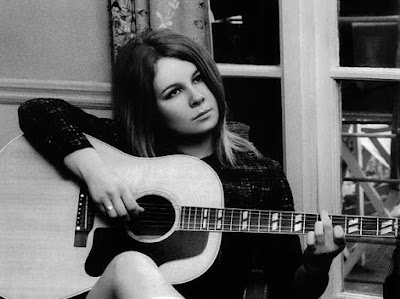 It's thirty years to the day that Sandy Denny died, aged just 31, after a massive brain haemorrhage triggered by a fall, collapsing at a friend's house just a mile or so down the road from where I live. She was a SW London girl, of proud Scottish ancestry - grew up in Wimbledon (that's her parents house in the Village on the cover of Unhalfbricking), went to school in Kingston, is buried at Putney Vale Cemetery (but we've done that - perhaps I'll get down there again later today).

The web's chock-full of Sandy fan and 'tribute' sites of varying quality (can I point you to this good one though, especially as Philip's been kind enough to comment here in the past?) and you know where to look for the biographical stuff if you want it, so I won't rehash it all here. This is a fine read, if you can find it.

Really I just wanted to post this, the opening track of the first Fairport album she played on, and possibly the greatest of her songs that is not 'Who Knows Where The Time Goes'.

Such sad resonance in the spare lyric (about Mary Queen Of Scots' last day), the inexorable processional of Richard Thompson's guitar, that clear, crisp vocal...

How often she has gazed from castle windows all
And watched the daylight passing within her captive wall
With no-one to heed her call.

The evening hour is fading within the dwindling sun
And in a lonely moment those embers will be gone
And the last of all the young birds flown.


Her days of precious freedom forfeited long before
To live such fruitless years behind a guarded door
But those days will last no more.


Tomorrow at this hour she will be far away
Much farther than these islands
Or the lonely Fotheringay.

[You should own this, at the very least]
Posted by davyh at 9:50 am