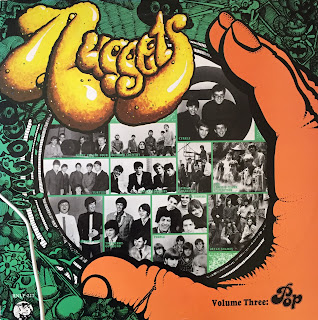 I know it's certain not to last, but right now in London it's a spectacularly sunny and unfeasibly warm blue-skied Friday and only this little Nugget'll do.


Another band from Los Angeles was The Parade. For the most part, the group was composed of aspiring actors who were more intent on furthering their careers in TV than they were in music. The exception was leader Jerry Riopell, who wrote, arranged and produced their music, and who maintained visibility in the 1970s with solo albums and performances. Because the group didn't tour, and because their completed album was never released, not many people outside of California heard their music (sleeve notes, 'Nuggets Volume Three; Pop')


I might add that this is seriously the best sunny 60s pop record you've never heard and easily as good as anything from the same period by The Lovin' Spoonful, The Turtles or even The Beach Boys. It was covered in the UK by Herman's Hermits*, but then you can't have everything.