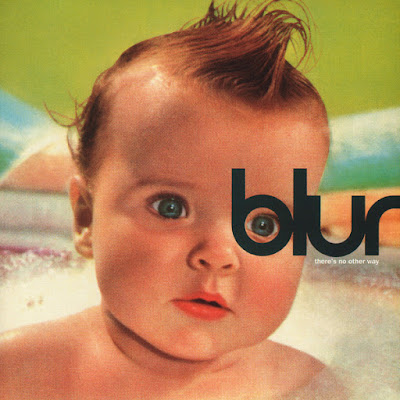 Blur's second single (after the little known 'She's So High') from April 1991 - now worth £25 if you believe this excellent fansite, though personally, as Arthur C. Clarke used to say on Mysterious World, 'I remain sceptical'. Great cover isn't it?


Easy to forget how sniffy the music press were about Blur early on - the view was almost that they were a novelty act, the sound-of-the-moment, not built to last, but this was a big UK chart hit (number 8!) that even a few jaded hacks from the inkies had to admit was quite good.


I saw them that autumn on one of those multi-band NME jamborees and against all expectations they were fast, tight, funny, spunky and punky and thoroughly ripped the place up.


Picking your way through the rather dated 'baggy' arrangements on this now you can hear prototypes of much of what was to come - strong guitar-propelled melodies, the Ray Davies influence on 'Mr Briggs' (and a bit of Syd Barrett on 'Other Way'), the woozy psychedelia of 'Inertia', the mockney pop-thrash of 'I'm All Over'. It all holds up pretty well I think.