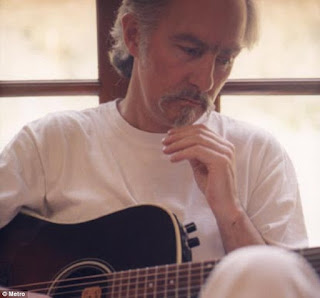 I was interested to read over at Jude Rogers' blog that the critically-lauded harpist and (for me) strangely wailing banshee Joanna Newsom was 'supported' at her concert at the Royal Albert Hall recently by none other than Mr Roy Harper, genius poet and singer of these Isles.


Surely it should have been the other way round? i.e...trendy strange waif backs up bona fide Britfolk/rock legend at big town comeback gig??

There is no justice in the world. Obviously.

This is the man who gave us, to name but a few...'Another Day' (think the This Mortal Coil cover is superb? And it is! Well hear his original, The Most Played Song On My iPod 2005-2007: FACT!), 'One Of Those Days In England', 'The Same Old Rock' and 'Cherishing The Lonesome', sang lead on The Floyd's 'Have A Cigar', had a whole Led Zep song dedicated to him, made Johnny Marr's favourite lost album of all time, sired a genius-in-his-own-right songwriter and guitarist AND recorded these - two of the loveliest songs for the ending of summer and the onset of autumn that you will ever hear.

That's the Grimethorpe Colliery Brass Band on 'Cricketer' - and they never fail to bring tears to my bloodshot eyes.

If you are hearing these songs for the first time ever, I genuinely, genuinely envy you...

[Originally from this and this; but both now available on this]

[Footnote - 'Cricketer': 'Legendary British DJ John Peel made an agreement with his producer John Walters that in the event of Peel's death, Walters would play the song. Unfortunately, Walters died in 2001, making the agreement redundant. Nevertheless, the song was still played in tribute to Peel on several radio stations after his death in 2004' - Wikipedia]

[And! Nick Harper's lovely 'Riversong' is playing over at Barefoot In The Head. Ain't I good to yooz?]
Posted by davyh at 12:02 am