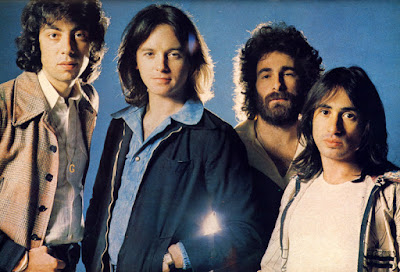 Of course it goes without saying, but I'm going to say it anyway, there would have been no Korgis without 10CC. And sorry, all 'post-modern', clever clever, nudge-nudge wink-wink irony bollocks aside, I absolutely chuffing well love this. I know! It's not even an OBSCURE 10CC track! (such things must surely exist? No?). It's not a lost gem from an otherwise pants-rated album! It's not an early acoustic demo scratched out pre-fame in a barbiturate-fuelled fug! NO! It's the one, Simon Bates Our Tune spinning, solid gold FM local radio station-loving, disco-snogging classic. *sigh*


It really is true that the woman on the 'big boys don't cry' spoken word bit (Kathy Warren) was the receptionist at the recording studio, drafted in at the last minute to smoulder. Hey, but you knew that.
.
Did you also know though that vocalist/guitarist Graham Gouldman was a former member of the Mockingbirds who had written hits for Jeff Beck, the Yardbirds, the Hollies and Herman's Hermits, singer/guitarist Eric Stewart was a former member of Wayne Fontana & The Mindbenders and that they originally got together with studio musos Lol Creme and Kevin Godley in 1970 as a session band called Hotlegs and had a surprise hit with "Neanderthal Man" ?

Did you WANT to?