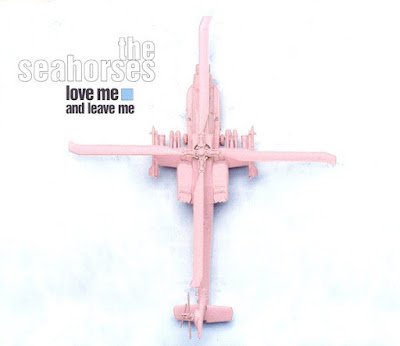 John Squire was the genius guitarist and Jackson Pollock-pastiching cover artist of the Very Important And Popular Stone Roses and in 1997 The Seahorses were his new band. We had great hopes of them at the time as I recall; The Roses Second Coming had been an eternity in the making and (bar about two songs) a hugely disappointing collection of flabby, sub-Led Zep indulgences, but with Squire promising punchier pop-rock with this lot, the future seemed a tad brighter.


In the end the band released just one album (the really-quite-good Do It Yourself from which this was the third single release) before splitting in 1999 whilst in the middle of sessions for the follow up. Squire went on to solo projects, none of which seemed to register on the end-of-Millennium radar. Maybe after all that Oasis mallarkey the record-buying public had had its fill of Mancs with guitars.

I still like 'Love Me And Leave Me' (it has a certain brio to it, don't you think?) and the two other tracks are, well - pleasing enough (especially 'Falling..') and not available elsewhere.

My favourite song of theirs though, and I'm sure you'll see why, is 'The Boy In The Picture'. It wasn't a single, but I've included it as a little bonus here because, hey, I loves ya and it's Monday.