We Wants Him Back 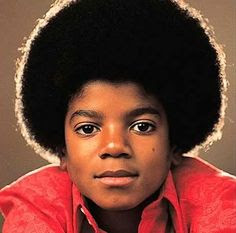 One of the things on Mrs H's birthday list for Tuesday was a copy of Michael Jackson's Thriller and despite my best efforts to track the regular CD down ('Don't have any in at the moment'), I ended up getting her the all-new super sparkly record company profit-margin enhancing 25th anniversary commemorative DVD and bonus track-including gold letter-boasting remastered ooby-dooby.

This has occasioned great debate in our household, most of it led by my eldest daughter (8 and a half) and starting with her innocent assertion on perusing the famous cover that she (had) 'thought Michael Jackson was white'.

And why shouldn't she?

She and her sister belong to an entire generation who have grown up with an image of this man as a strange, Max Factored freak; a Willy Wonka-like weirdo who's in the news from time to time for strange parenting behaviour, complicated things involving money (or the lack of it) and sinister accusations relating to little children.

I mean, why would Mummy want a record by him?

Then we showed them this...

Quite rightly, they were rather impressed.

Now you and I know that Thriller is not even that good an album - for every 'Billie Jean' or 'Wanna Be Starting Something' there's a Macca duffer or 'Lady In My Life' (and I've never liked 'Beat It' much either) - but, call me a sentimental old fool if you will, it is a source of no small pride to me this week that in a tiny way two little girls have started to learn a little about how it used to be...